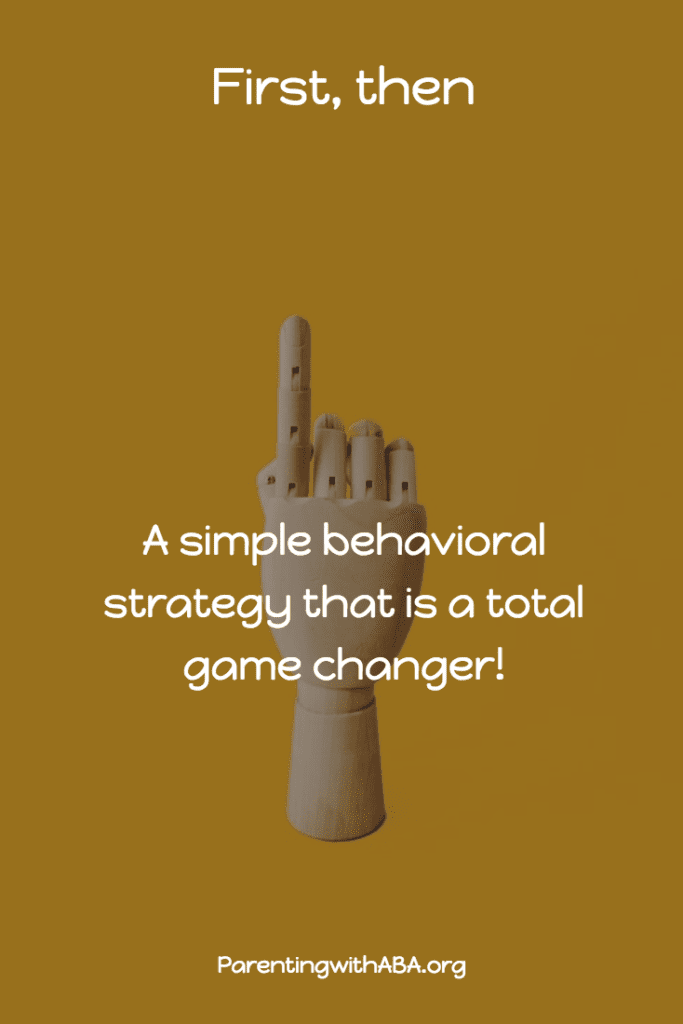 First do your homework, then you can play Wii.
First eat your vegetables, then you can have a cookie. (Or Bark Thins in my case. Have you seen these? Dark chocolate with pumpkin seeds and sea salt. It will change your life. I eat waaay more vegetables now so I can have it!)
First do your job then get a paycheck.

This natural first do one thing that’s not awesome to earn something fun is something you already do every day in your parenting. It just happens. You may not even think about it and you probably don’t say it out loud.

But what if you did? Say it out loud? To your kids? Tell them what the logic is and what good thing is coming to them?

Here is a good natural example where verbalizing the principle might prevent problem behavior. (This one is loosely based on experience of my sister- thanks, K!)
Your 2 year old is playing with a toy and it’s time to go somewhere. You pick him up and take him to the car. In order to get him in the car seat, you take the toy out of his hand but plan to put it right back in his hands after you get him buckled.
Option 1: Just take the toy, buckle the kid, and ignore his protests, however loud they may be.
Option 2: As you are getting to the car say, “First get buckled, then get your toy.” Do the same actions as above but the kid knows he is getting his toy back so hopefully he isn’t struggling against you. You get him buckled faster and avoid some un-fun 2-year-old behavior.

Using the consistent language of “First _____, then ____” let’s your child know that something good is coming and that they have some control over the situation. They can choose to engage in that first behavior (do your homework, get buckled in the car, eat your veggies) in order to get the then thing promised to them.

In the special ed world, we often do this with visuals. If you find something like that is necessary for the hardest parts of your daily routine, add pictures! Maybe you need one in the bathroom for “First brush your teeth, then book time.”

Reserve this language for the times when you need to prevent problem behavior. You know when those times are for your child and you probably already have a plan in your mind to reward them for behaving through those hard times. Say it out loud. Let the kid know what he/she gets for the ‘then’.

Keep it simple. First _(do action)_, then __(get something)__. Get something might mean get to do something. I’m not saying give your kid candy every time they do a desired action. Maybe they just get a high five. “First pick up your toys, then high five!” If it works, it works.

What you’re doing is a research-based strategy called The Premack Principle.